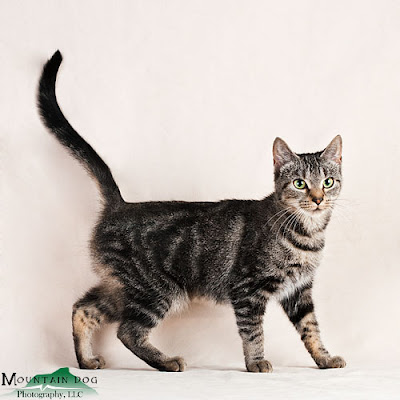 My husband, Ian, is lovingly referred to as “Mr. Catwhisperer” because he has an uncanny ability to calm stressed cats. I am incredibly lucky to have him as my assistant at many portrait sessions. He’s not just a helper though. Without his patience and dedication I would simply not be able to get the wonderful cat portraits that I’ve gotten.

When we meet a new cat we first have to identify what motivates them. Most cats respond to attention and catnip, but treats and toys are also popular amongst our feline models. Some cats are rather intimidated by being exposed, forgive the pun. These cats don’t appreciate being up on a table in front of the lights and would much rather be exploring under chairs or snuggled in a warm lap.

When a cat doesn’t take readily to staying on the table Ian spends a few minutes with them, usually wrapping his arms around them to make them feel secure. When he feels the cats become less tense he slowly backs off, all the while scratching behind their ears, shoulders, and back. It’s really a joy to watch him work. 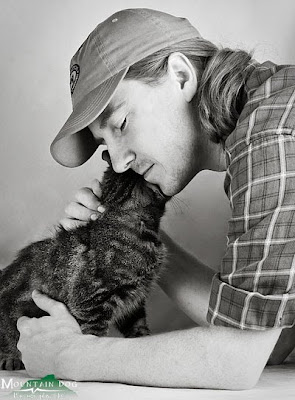 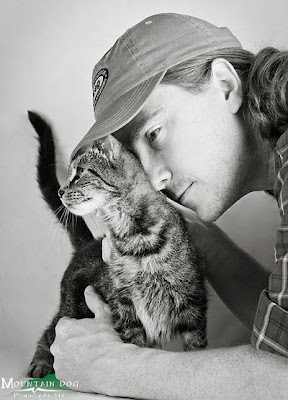 When we met Mischief today at first she was only concerned with exploration. She’s quite an affectionate kitty, but she just didn’t see the point to staying on a boring ol’ table. There were dust bunnies to catch and squirrels to watch! After Ian worked with her she had a change of heart. Now she just wanted attention. Once a cat realizes that they want to stay on the table we can really start the session.
Quite honestly, posing cats is not hard. That surprises many people, but I always think of it as giving the cat a reason to be in a given pose. Many of my portraits are not posed, but there are certain positions that work for cats and some that don’t. If I want a cat to lay on their side I give Ian the cue and he will usually scratch the cat behind one ear and shoulder and lure them to the table. Frisky cats will require more attempts at this since they tend to pop right back up after laying down.

We have a whole bag of tricks like this to get cats to sit, look in a certain direction, and stand. Kitties can certainly be stubborn but with a lot of patience, treats, catnip, and attention most of them will come to realize that having their portrait taken isn’t such a scary or boring thing after all.
Peace and Furballs,
~Kelly
show hide 1 comment
COMMENT
mom - September 4, 2009 - 5:48 am

Great stuff this week Kelly! Only trouble is that you are giving away your secrets! Well, not all of them I am sure. Interesting to find out how Ian works. You always say what a marvelous helper he was, but you never explained it before. So great feed!