If Marco’s story doesn’t tug at your heartstrings, I don’t know what will. He was hit by a car in February and picked up by the woman who hit him. He suffered massive spinal injuries and had been brought to Sequist Animal Hospital while animal control attempted to find his owners. After 36 hours and no leads, vet tech Jen Wagner decided to bring him home and make him comfortable. The pit bull pup was paralyzed in his hind end and required round the clock care at first.

Jen started to share his story and not long after his ordeal began a kind individual purchased a custom wheelchair for him from Eddie’s Wheels. He took to his new mode of transportation within minutes. Naturally outgoing, Marco doesn’t seem to mind the extra attention he gets from strangers. But despite all the attention and media coverage, Marco still needs a permanent home. He is fully vetted for the year and comes with his wheels and orthopedic beds. He does have some special needs, like regular potty breaks every four hours during the day and physical therapy, but other than that he is a regular ol’ dog. As the portraits below show, nothing really slows him down. 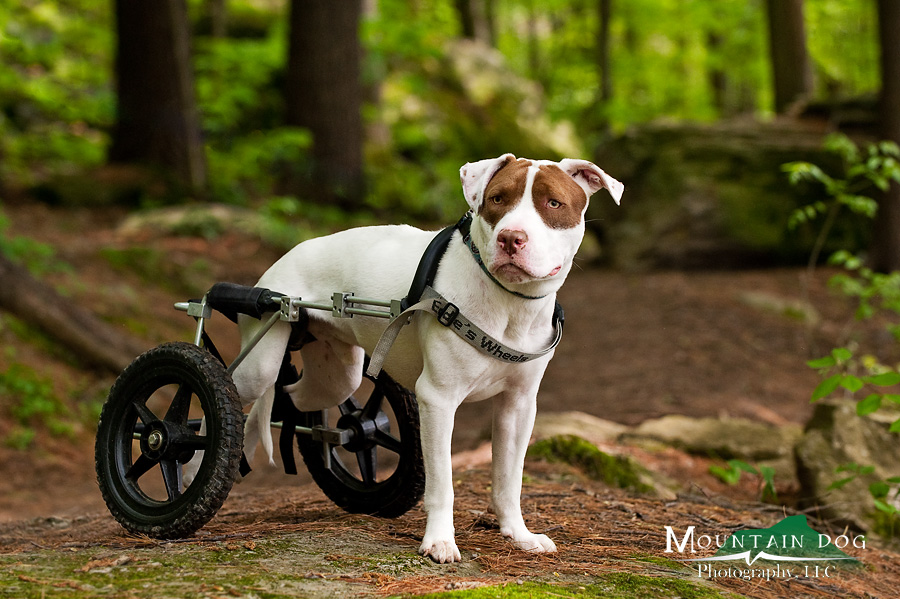 Marco's portrait session was held at Indian Brook Reservoir in Essex. The park was busy and he loved meeting so many new humans and dogs. 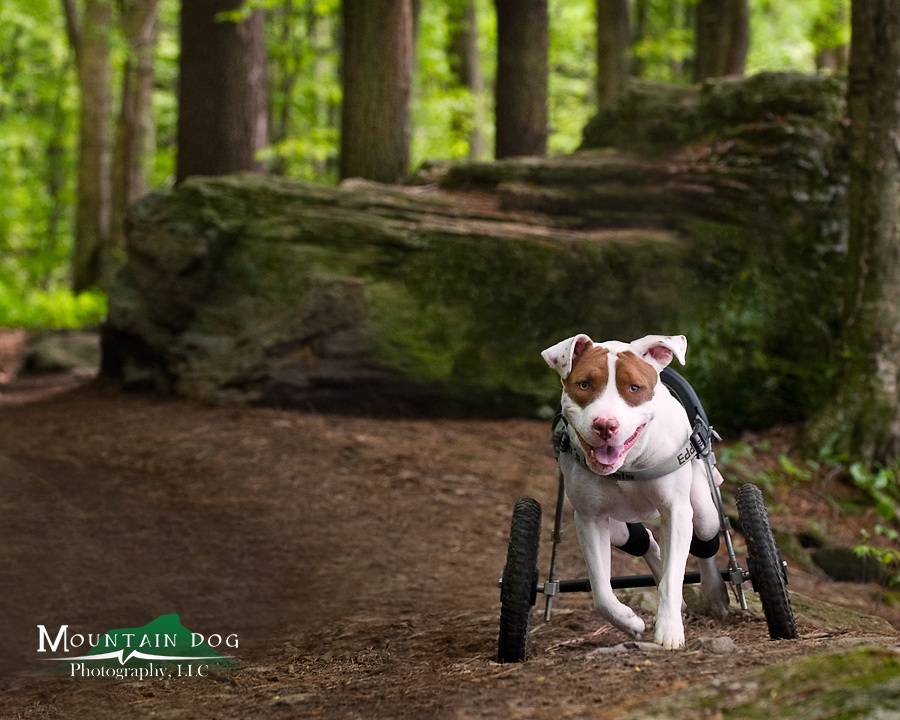 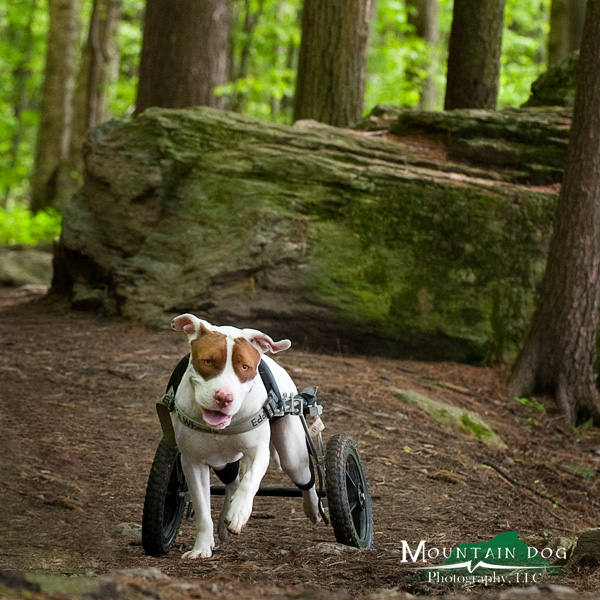 I love his smile!

Marco loves water and entertains himself by blowing bubbles.

Awww, do I have to get out of the water now?

He can be very insistent though... "Play with me!"

After hiking, splashing, and playing Jen took Marco out of his chair for some relaxation.

Marco is learning to balance himself to sit.

With a little wriggling and some support from Jen, Marco can stand for very brief periods on his own. Jen is hopeful that with continued therapy and a family that will keep pushing his limits, he may be able to walk again.

Marco is one of the most photogenic dogs I have ever worked with. I could have photographed him all day.

UPDATE!! Marco has found his forever home! He is lovin’ life with his two new greyhound pals in Massachusetts!

Please pass Marco’s story on to as many dog loving friends and family as you can.  Meeting him was an honor for me and not just because of the inspirational nature of his ordeal. Marco is a loyal friend, a hiking buddy, a fishing buddy, a cuddle bug, a potential therapy dog, and so much more. He is someone’s soul mate.

Check out his Facebook page at The Magic of “Marco” and his news clip.  He’s one well loved dude, for sure.

« Without My Shadow Ruby and Lulu :: Colchester, Vermont Dog Photographer »

Marco’s story and your beautiful photos had me reaching for my tissue box! I hope he finds the perfect home…he’s adorable!!
xo

What a beautiful Boy!!!! He would be a blessing in anyone’s life.
I hope he finds someone who loves and appreciates his courage, and has time for him.

Marco is absolutely gorgeous…what a keeper!

He is a wonderful dog. I have a dog who has been paralyzed for the last 3 years. I’m so glad that he is part of my life. It can be overwhelming caring for these dogs but the effort is repaid in love.

We at Eddie’s Wheels love this dog, and can attest to what a great temperament he has. He’s a puppy, and accepts correction from older dogs for his puppy energy without any sign of defensiveness or aggression. Taking care of him will not be expensive or difficult. Put him in his wheels and he’ll rehab himself – time will do its healing work. He just needs a human companion to share his life. He’s a great soul – he’ll be a blessing to any household who opens their doors to him.

Marco you ARE SO photogenic. If I owned my own home business you would be mine. I’m so glad to see you using you’re back legs!

So sweet…I am so happy for Marco, he really looks good…hopefully he will find a good home!

Gorgeous photos Kelly!
Great job with Marco the Wonder dog!
You can see and understand his spirit!

Marco’s eyes are so expressive, what a beautiful dog & I’m touched to see his photos…

These are such outstanding images of a gorgeous and courageous dog!
I found your site through the HeARTs Speak website, and you are such an inspiration to me as I try to learn how to capture the personalities of shelter and rescue animals too. Sadly I live in a very ugly part of the country and your gorgeous location photography makes me drool! We are experiencing the worst drought in 50 years too so there is not even any green grass or bushes to use. I have a lot to learn about finding light, angles and composition, happy posing, etc but it is a labor of love as I know it helps the animals find new homes as it must have with Marco here — so glad to learn he is in a forever home now.